As The World Series of Beer Pong XI approaches (July 6-10th @ Westgate Las Vegas Resort & Casino) and players begin to lock in their partners for the event, there is a lot to consider.  Partner selection for a large, super-competitive event like The WSOBP is key.

As it turns out, chemistry still counts for something in beer pong. 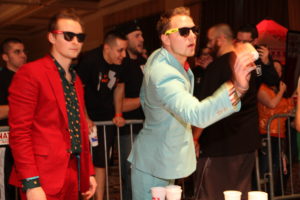 We are firm believers that in any team, whether it’s beer pong, football, baseball, etc. there is a balance of star players and role players. It’s the reason the New York Yankees and the Boston Red Sox don’t win the World Series every year. It’s the reason the Washington Redskins don’t win the Super Bowl every year. The best teams are more than just the collection of the best players.

Beer pong, in particular, requires this mentality. To be successful, someone has to settle for being number two. Someone has to settle for being just “_____’s partner.” Some people thrive in their new roles, and some people don’t. Even the best players go through slumps throughout the duration of a big tournament. A great role player knows when to pick his partner up, and when to fall back when needed. The role player may never get the credit he or she deserves, but in the end may be the most valuable piece to a team.

For such a simple game, there is a lot to think about. Who shoots first? Who shoots second? Who gets third shot? Who shoots the rebuttal? Who played better? Who cost your team the game? Who’s watching you shoot? What are they saying about you? What are they going to think of you after the game? Will they ever want to play with you again? These kinds of questions aren’t measured in shooting percentages and Skype practices. They can only be answered on the table and with experience.

So, how are you picking a partner for this year’s event – will it be a player who you think will take you the farthest, one who will keep you level-headed and build you up when the crowd gets involved, or someone who you will have the most fun with whether winning or losing?