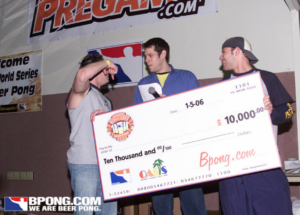 Preparing for your first World Series of Beer Pong tournament can be difficult; especially, if you haven’t had the pleasure of attending one of our affiliate organization’s fantastic pong events beforehand.  We are going to give you all who don’t quite know what to expect a little insight on how to better strap yourself in to make the best of your experience at The World Series of Beer Pong!

Let’s get the obvious out of the way. It is very hard to describe the adrenaline that will rush through your veins when you walk into a Las Vegas Ballroom filled with hundreds of beer pong tables, see thousands of beer pong players and realize you are about to play beer pong for $50,000; even having already experienced it.  Therefore, trying to imagine what it will be like having never been before is nearly impossible.  The environment is one like you’ve never experienced.

There will be unicorns and aliens walking around Westgate Resort & Casino that you won’t be able to recognize because they will look just like everybody else in the ballroom.  Though, if you feel like you may have been matched up against a pair of monsters during prelims, don’t get discouraged.  You could be playing a former World Series Champion or a player who has banked 10’s of thousands of dollars playing this sport over the last decade.  Focus up, play to the best of your abilities and take notes.

Don’t let these guys get in your head either!  The best defense is a strong mental game and a witty mouth.  If you’ve let someone trash talk their way under your skin, you’ve lost the game and more importantly, you won’t be having any fun.  Appreciate their intent (trying to win the game), laugh if they say something funny, don’t take it to heart, realize that it’s all a part of the game and don’t let it affect yours!

If you are there for more than just the party and beer you should shoot for a 7-5 record during prelims and hold your breathe.  7-5 has been good enough to make the cut for the Day 3 Playoff Bracket in most years.  On more rare occasions 6-6 records have made the cut, however, there have also been years when you’ve needed to have a polished 8-4 record to get in.

Relax!  Come ready to play, but relax.  The environment is incredible and different from the first two days.  Everyone wants to bring their A game, but it happens all to often that players who’ve never been there before become overwhelmed, play anxious and get upset with themselves when they don’t shoot up to their abilities.

If you advance, keep your head on your shoulders and don’t let the satisfaction of potentially surpassing your expectations dilute your focus.  You never know whose day it is and it may just be yours!

Though eventually, everybody falls but 1 team.  When it’s your turn to get erased from the bracket, stick around and pick someone to root for.  Supporting your friends (or maybe your new friends from another country) is almost as fun as playing yourself!

It’s not the end of the world.  It was your first crack at it and the competition is tough!  Take advantage of the many side events, sponsor activities and the one thing that none of us have yet to experience at The World Series of Beer Pong, the summertime, Vegas sun!

If you’ve enjoyed your time, get to know some people and find a place to play close to home. Elevate your game, come back next year and do it all again!