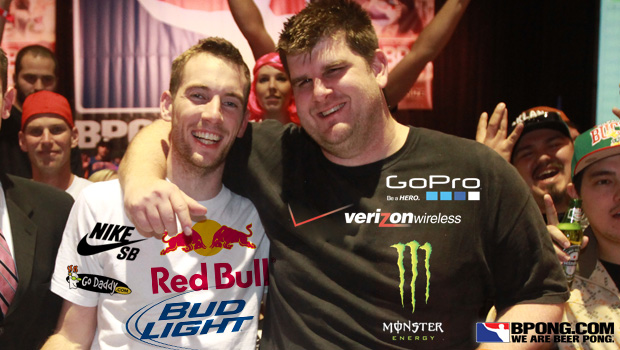 With its unique characters, soap opera storylines, and high stakes competition, it seems only a matter of time before beer pong becomes a popular televised event. Even the lamest weekly tourney has better storylines than some of the crap that runs on cable television.

So what’s the hold up?

Many players feel that with the focus on beer, it’s a tough sell to advertisers. I can kind of buy that. I know that several major beer companies have steered clear of local beer pong events due to the association with binge drinking. It doesn’t make a whole lot of sense, considering that most television shows use sex and violence to earn better ratings.

An argument can also be made that the heated trash talk may scare potential advertisers or networks. Since trash talk is such a big part of beer pong, it would be a shame to deny that to the viewer. Some of our most beloved players are just that because of their trash talk. Sure, you can bleep out the F word a dozen times, but where’s the fun in that?

In my opinion, beer pong will only become as big as its sponsors. Bottom line, we need more companies involved to help grow the sport and get it on television. Most TV networks would air footage of sleeping cows if it made money. For some reason or another, beer pong organizers around the country have had a difficult time locking in event sponsors.

The real question is, what kind of sponsors make sense for beer pong? You won’t find a more hardcore group of (mostly) 21-34 males that spend money than a major beer pong event. Most players spend upwards of $1,000 just to travel and play in the World Series of Beer Pong, not including the food, beer and money they gamble away. Seems like a pretty solid market if I’m an advertiser looking at that demographic. And buying into an event sponsorship such as the World Series of Beer Pong is far cheaper than a traditional advertising campaign.

I’m also surprised that no major companies have stepped up to sponsor individual players. There are certainly a few that are “household” names in the beer pong world that would be great for a cutting-edge advertiser. I recently watched “Lords of Dogtown” (great flick, by the way) and it reminded me a little of the beer pong scene. In that movie, you could see how several skateboard companies fought over signing the hippest young skaters.

We’ve seen some small-scale sponsorships before, but nothing from a big company. Who will be the first? In the grand scheme of things, giving a top player $10,000 a year for pushing its name/product is a great deal. The player could enter and travel to every major during the year, proudly pimping the product or its name, or both. In return, that sponsor gets all the name recognition that goes along with associating itself with a top player. Tons of social media exposure, interviews, photos, etc. It makes so much sense to me, but maybe I’m just taking crazy pills.

What kind of companies do you think would be great beer pong sponsors? What would you be willing to do as a player to be sponsored?