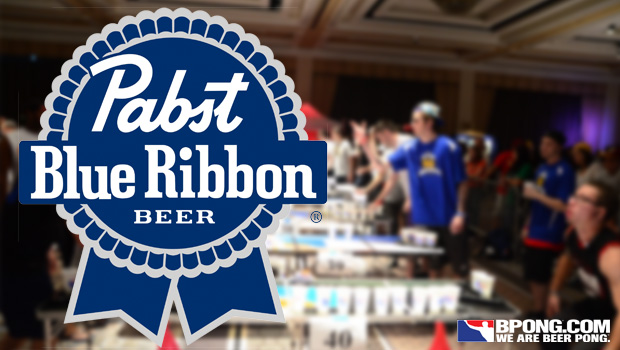 The biggest beer pong event in the history of the world just got a little bit better.

BPONG is proud to announce that Pabst Blue Ribbon will be the official beer sponsor of the first-ever Masters of Beer Pong tournament. As if a few days of summer sun in Las Vegas at the Hard Rock Hotel and Casino, a $100,000 minimum prize pool and pool parties weren’t enough, there will be plenty of ice-cold Pabst Blue Ribbon to keep us hydrated. What else could one ask for?

Pabst Blue Ribbon is no stranger to the biggest beer pong tournaments in the world. You may recall the tasty lager at previous BPONG events, including the World Series of Beer Pong III, WSOBP IV, and this past WSOBP VIII. The only complaint the world’s best beer pong players have about PBR is when there isn’t enough.

The World Series of Beer Pong has come a long way since its first days in Mesquite. Although I did not attend my first WSOBP until WSOBP III, the horror stories about the Sin City beer live on to this day. Ask anyone who attended one of those first tournaments and you’re guaranteed to get a less-than-fond memory about the choice of beer.

It’s only fitting that that the biggest beer pong tournament known to man will serve an award-winning beer. PBR, after all, was selected as “America’s Best” beer at the World’s Columbian Exposition back in 1893, some 120 years ago. While a lot of things have changed in the world since then, America’s thirst for delicious beer has not. Pabst Blue Ribbon still stands tall among its peers.

I’m sure the announcement of PBR is just one of the many surprises Billy, Reed and company have in store for us in July. If this doesn’t convince you to sign up for the MOBP, I don’t know what will. It’s not going to get any cheaper, so what are you waiting for?