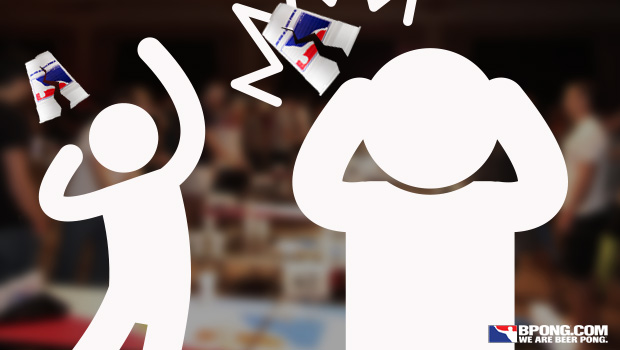 So, what’s your point, you ask? Well, a regulation BPONG plastic cup weighs .28 ounces. And for some strange reason, countless beer pong players have convinced themselves that taking a BPONG beer pong cup, smashing it against their own head and throwing the cup onto the ground is an amazing distraction technique. This folks, is why the media portrays beer pong players to be a community of alcoholic douchebags.

We are all adults. We may not act like it from time to time, but by definition we are adults. I would hope that we could get past certain childish thingslike smashing beer pong cups over our heads, but I’m not so confident that we can. Newsflash: We are not impressed.

Have you ever walked into the practice area at the World Series of Beer Pong, hoping to get a few shots in before your next round? You finally find an open table to play on, except all that’s left is a an empty rack and a few overturned cups on the table. You try and gather the cups that you can off the ground, finally find ten and then fill them up with water. Except most of the cups start leaking out because some tough guy thought they would impress someone by smashing the cups.

This is why we can’t have nice things, guys.

Do you ever wonder why some tournaments drag on and on and you can’t figure out why? Because half the tables don’t have enough cups or water left to play a game. You shouldn’t have to hunt and gather enough cups and water to play a game of beer pong in a tournament.

And let’s be honest. BPONG cups aren’t exactly expensive, but they aren’t cheap either. When you play at home do you smash cups and throw water around like a gorilla? No, you don’t. You probably use the same cups you have been using for the last couple of years. We’ve all been there. You wash a few dozen of your BPONG cups and then stack them up like a pyramid on the kitchen counter to dry out. Just because you are in Vegas or in some ballroom of whatever hotel agreed to hold a beer pong tournament, you should have a certain amount of respect.

I know it’s easy to get into the emotion of the moment after hitting or missing a big shot (I have more experience with the latter, personally) but enough is enough. People need to stop smashing cups, literally.

In football, if a player kicks or throws the ball away like a dickhead it’s a penalty. The same in basketball. In baseball, if a player throws his helmet like an asshole onto the field of play he’s likely going to get tossed. If you guys ever want beer pong to be taken seriously, smashing cups isn’t helping.