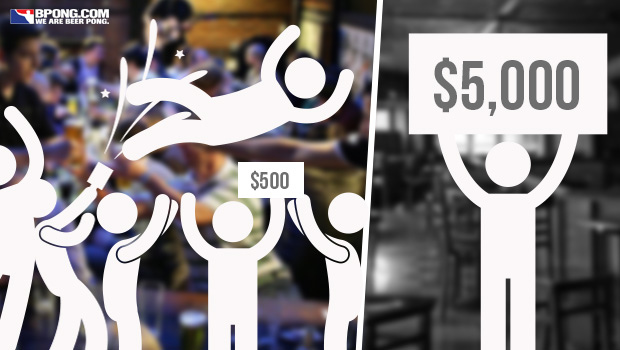 Don’t get me wrong. I love the idea of playing beer pong for big money. With prize pools of $65,000 and $100,000 for the World Series of Beer Pong and the Masters of Beer Pong, respectively, there are some amazing opportunities to win some big money playing pong.

I can understand why the top players want big money tournaments. They’ve got a chance to win. For someone like a Pop or a Kessler or a Ross Hampton, flying across the country for a weekend of pong is a sound investment. They’ve likely already won a bid, and whether they win or lose the big tournament, they’ll probably at least make enough to recoup their investment. But for others like myself, what’s the point?

When I first started playing beer pong, it wasn’t the money that attracted me to the game. I’m sure I’m not alone, because a lot of the players that started around the time that I did are still playing, too, and there wasn’t any money to be made back then. It was the community and the aspect of competition that drew us in and kept us engaged. Sure, we all get older and priorities and responsibilities change, but none of us picked up a pong ball for the first time with the hopes of cashing in for big money. We wanted to drink and have fun with our friends.

It seems that throughout the country, beer pong tournaments need to be a “Best Of” or take place in a ballroom to be worth our while. I’m tired of playing beer pong in the same ballrooms with the same overpriced drinks, stuck in the middle of nowhere with nothing else to do.

I’ve been saying for years that tournament and league organizers need to cater to the new players, not the “elite” players to survive. Sure, $5,000 prize pools are awesome, but you’re also charging quadruple the entry fee plus travel expenses for multiple-day tournaments. The new, casual player isn’t going to make that investment, and if he does he will likely get throttled so badly in competition he won’t be coming back.

I can only speak for my local area, but at least in Maryland, it seemed that as the prize money increased over the last few years, the tournaments became fewer and fewer in between and the loyal players stopped coming. A big prize isn’t worth it to someone who knows they have no chance of winning. It’s no fun to come to a tournament and go 0-2.

Having more tournaments with less prize money is a win-win. More people get to play, and even if those top players decide that a $100 isn’t worth their time, the five casual teams that sign up knowing they have a better chance to have fun and win something will more than cover the cost of losing those top teams. Parity is rampant in professional sports because it works, beer pong is no different.

If you look at the beer pong communities that are thriving, it’s no surprise. Places like Lehigh Valley are attracting over 100 teams a week by having several small tournaments. They aren’t holding them in small hotel ballrooms, but in local bars, with local players, for modest cash prizes and drink specials. These are the players that are going to keep playing and become the next great players.

5 thoughts on “Quality or Quantity?”