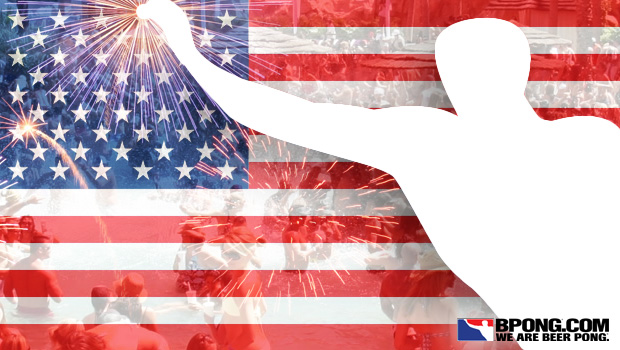 There’s nothing quite like the Fourth of July. Sure, you Canadians may disagree, but in the United States, July 4th means warm sunshine, cold beer, cookouts, and all that other stuff you hear in country music songs. But why not celebrate our nation’s independence with our favorite pastime in America’s playground: Las Vegas.

I have no idea what to expect this time around, except maybe the best Fourth of July party of all time. Strictly in terms of beer pong, none of us have ever entered a beer pong tournament for $100,000. The stakes are the highest they’ve ever been, and they could get even higher. I mean, have you seen the pictures of where we’ll be playing? This isn’t your typical ballroom. The pictures of the Hard Rock Hotel and Casino look insane. With the setup and lights, the room looks like it could double as a Kanye West and Jay-Z concert venue. I can’t fucking wait.

And besides the beer pong, how about the pool parties? Most of us are used to coming home from Vegas with the Pong Flu. This time, we’re coming back with tans. Not sure if I’ll be going to the pool party on the Sunday, Monday, Tuesday, Wednesday, Thursday, or all five of them.

It’s not going to get any cheaper, so the sooner you sign up for the biggest beer pong event of all time the better. As of right now, $250 is all it takes for the biggest party you’ll attend this year.

We’ll see you there.