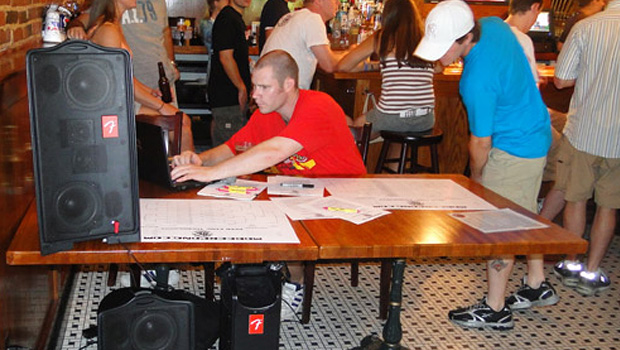 If you’ve hung out at this website enough, attended a World Series of Beer Pong or two, or spent any time in some of the more popular beer pong groups on Facebook, you probably have a pretty good idea who some of the better players are around the country. These are the guys winning multiple satellite tournaments, winning the weekly tournaments, and generally winning most of the cash. Some of the better players in the country can make a decent amount of money solely from beer pong, if they live near the right organizers.

Beer pong tournament organizers are the unsung heroes of our community. They are the ones who keep the movement moving. A great beer pong organizer can singlehandedly make a region thrive in national competition, and a poor organizer can just as easily make one fail.

Most of us take for granted what dedicated beer pong organizers do for us. They put in countless hours scouting and meeting with venues, ordering shirts, organizing leagues and tournaments, and working both outside and inside the community to put the best product on the table. We don’t always see the work being done because we only see tournaments as they happen, never the amount of work that goes into each one.

Beer pong players are mostly a selfish bunch. We complain there aren’t enough tournaments, that the prizes aren’t large enough, that the tournaments run too long, etc. But then we complain about the opposite. The majority of players take and take, complain and complain, but it’s the organizers who put up with everything and keep hosting events.

I’ve ran one beer pong tournament. While it pretty much ran smoothly, it’s not something I ever want to experience again. I can’t handle the constant complaining from players complaining about anything and everything, usually just to complain. I’m the kind of guy who likes to leave right when I am finished playing. We complain about getting home late after we play, but the organizers are the ones who have to stay to the very end. They have to put the tables away, maybe carry them out to their truck, and make sure we didn’t destroy the venue too much. They’re the ones who answer for the bent tables, the holes in the walls, and the urinals that were ripped off the wall.

I don’t mind when organizers take a cut of the profits for running tournaments. They put in all the work and deserve something for their time. But either an organizer doesn’t take enough and gets taken advantage of, or takes too much and gets accused of stealing from players. It’s a fine line and impossible to please everyone.

It’s a tough gig, being a tournament organizer. They probably contribute the most to the beer pong community and get the least in return.

Who are some of the best beer pong organizers in your area? Let’s recognize those guys who are putting in the work behind the scenes to grow our sport.