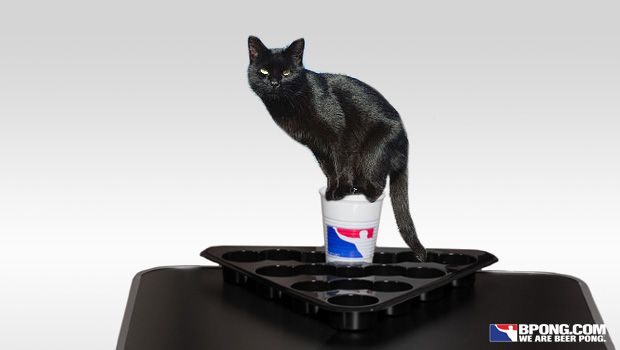 Did you know Michael Jordan wore his blue University of North Carolina shorts underneath his Chicago Bulls uniform for good luck? Tiger Woods always wears red on Sundays. Almost every athlete in every sport and level of competition has some kind of superstition. Beer pong players are no different.

If anything, beer pong players are more superstitious than average athletes. There are very few moving parts in a game of beer pong: Two players, ten cups and two balls to a side. There is little margin for error, so beer pong players are always looking for something to give them a leg up in competition.

Some players are superstitious as to what side of the beer pong table they shoot from. If they are used to standing on the right side of the table and you make them stand on the left, don’t expect a great game from them.

Some players have lucky shirts, shorts, shoes or hats (or whatever accessory you can think of). Sometimes, when you look at pictures of the same people from different beer pong tournaments, it’s hard to tell the difference because they are wearing the exact same thing. Of course, there are some of us who wear the same stuff because we don’t wash our clothes, but that’s a different story.

Some players need to bounce the ball a certain number of times before they shoot. Maybe they need to dip it in the water cup and shake it a few times before getting ready to shoot. Not to mention, there’s also those annoying players that need to take a few practice shooting motions before throwing the ball, like they’re lining up a tournament-winning birdie putt on the 18th green at the U.S. Open.

Some players have racks they always shoot at and ones they just can’t hit. They may be able to hit the 10 and 6 racks without hesitation, but give them an “ugly” rack with cups hit all over the place, and they may not want to shoot.

Some players need to have the hit cups placed on a certain side of the table before they shoot. Even if they are completely out of the way, they just can’t shoot with them being on the “wrong” side.

Some of us are superstitious about what we drink the day of a major beer pong tournament. Whether it’s a 40 oz. bottle of King Cobra Malt Liquor or an entire bottle of Jack Daniels, we can’t function without it.

What are some of your beer pong superstitions?