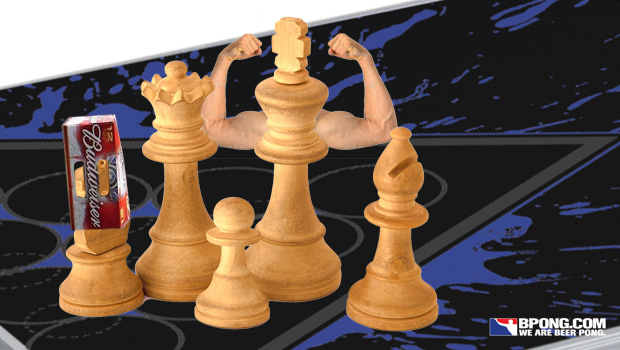 You wouldn’t guess there would be much strategy involved in a game of beer pong. It’s just the first team to hit ten cups first, right? How much strategy could you possibly need except to hit more cups?

To answer the question: There is a lot of strategy that goes on into a typical game of beer pong. And there are some big decisions to make even before the first ball is thrown.

When we arrive at a beer pong tournament, we usually find an empty table and start shooting around. Depending on how the venue is set up, you may develop a “comfort level” with a certain side of the table. Maybe there is more space to move around, maybe it’s less congested and there is less of a chance of being bumped into while you shoot, but some sides of the table offer a distinct advantage to a team. A lot of teams will get so used to playing on one side of the table, that when they are put into the position of playing on the other side, it throws them off a bit.

Usually, we use rock, paper, scissors or a coin flip to determine who shoots one ball first or two balls second. A forgotten option is to also choose sides instead of choosing shots. It’s kind of like deferring a kickoff in the NFL. I will almost always choose balls if I win, sometimes when I lose I will ask the team if they want balls or sides. A team that you know doesn’t want to switch sides will sometimes give you the balls and keep the side they are on, which allows you to have balls first even though you lost the toss. Sometimes, getting to the table first and taking the preferred side will help increase your chances of earning balls first.

Another element of strategy is choosing one ball first or two balls second. To me, it’s a no brainer to choose two balls second. You can start the game off 3-1 and can immediately back your opponent into a corner. But especially this past year at the World Series of Beer Pong, I noticed more and more teams choosing the one ball first. I don’t know why someone would choose this except if they know they will be shooting 100% and ending the game first, but to each their own. For those of you who choose to shoot one ball first, why do you prefer that?

Another big decision to think about is who shoots third shots? Some teams like to give these shots to the “hot” player or the one who just shot, but others like to play the percentages and give it to the better player. When I play with a player better than me (almost all the time since I’m terrible) I always let them take the third shot. Even if I am having a better game, the odds still favor him making the cup more than me.

Lastly, a decision needs to be made when shooting rebuttals. Do you organize rebuttals so a certain player will be shooting at final cup? Do you let a specific player shoot at a specific rack? There’s a lot to think about.

What are some of the strategic moves you make on the beer pong table?