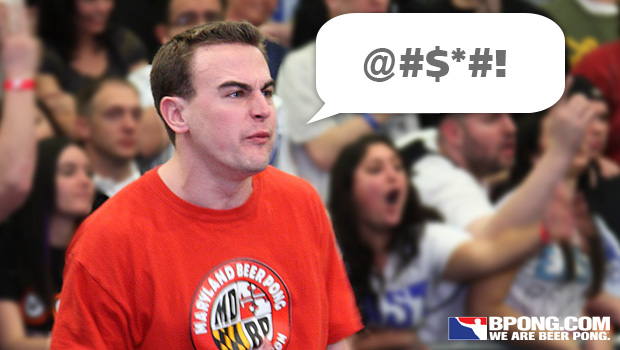 One of the best parts of playing beer pong is the trash talk. It’s something that draws us to the game time and time again, keeps it interesting and fun, and provides an extra element of intensity that most of us don’t experience in our daily lives.

When I first started playing, I loved talking trash to people. I think I enjoyed the trash talk more than the beer pong itself. I tried to be as funny and clever as I could, with my main goal trying to get the other team to miss. Sure, I got branded as an asshole by most people, but those who knew me off the table knew it was all in good fun and didn’t take it seriously.

Somewhere along the line, however, the line between acceptable trash talk and getting too personal became blurred. Now, it seems like there is nothing sacred on the beer pong table. You can talk about someone’s wife, child, girlfriend, etc. all in hopes of them getting to miss one shot in a game of beer pong.

I realize that, as a society, we have become desensitized to what is considered right and what is considered wrong. It’s easy to spew a bunch of foul shit off on Twitter and Facebook and act like a complete asshole and troll everyone because there are no repercussions. It’s the reason why horror movies have become more graphic, and movies like “The Hangover II” were terrible, because everyone is trying to “one up” everyone else. So your opponent didn’t miss his shot when you made fun of his haircut, so why not make fun of his girlfriend and see if you can get a reaction?

At what point do we say, “Enough is enough?” I mean, we are mostly all grown men and women. Most of us have careers, families, and lives outside of major beer pong tournaments to think about. Aren’t we all past the point where we have to prove our toughness to each other? I mean, people still do that? I’ve been punched, slapped and spit on, and I have just stood there and laughed because I am not going to jeopardize getting arrested or going to jail over a, in the long run, meaningless game of beer pong. Not to mention, I would probably get my ass kicked.

Someone made a Facebook post this weekend about how the crazy beer pong drama and trash talk doesn’t occur as much on the West Coast. I don’t know for certain, but it makes sense. You see those guys at the World Series of Beer Pong and it really looks like everyone is just having fun and getting along. Sure, there are always exceptions, but why is everyone else so damn mad?

I’ll be the first to admit that I am certainly being a hypocrite. I have crossed the line more times than I’d like to admit. I’ve said some things in the heat of competition I certainly regret and am embarrassed of to this day. I’m sure I’ve lost some friendships and people look at me differently as a result, and I understand those are the consequences of my actions.

At the end of the day, though, it’s just beer pong guys. One of the reasons we are all here is because we like competition, we like drinking, and we enjoy the community we’ve all helped build. Can’t we all just get along?