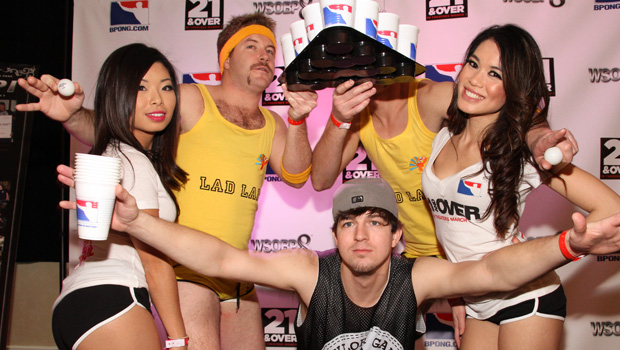 The World Series of Beer Pong VIII officially kicked off this morning at the Flamingo Hotel and Casino in Las Vegas. When former Las Vegas mayor Oscar Goodman opened the competition declaring beer pong the official sport of Las Vegas, the 372 teams in attendance erupted in cheers.

Day One of the World Series of Beer Pong is always a celebration. Every team starts with a clean slate and an equal chance at making a run at the $50,000 grand prize. Everyone is a contender on the first day. Teams do their best to rack up the wins and positive cup differential, positioning them in the best possible spot for a high seed in the third and final day of competition.

At the halfway point, the separation between the contenders and the pretenders begins to widen. While 41 teams remain undefeated win six wins at the halfway point, two teams sit tied in first place with the highest cup differential of +34. BoozinGear.com presents Clinically Proven and Bangarang are the two teams everyone will chase tomorrow. Chris Kingsbury and Christopher Cross, members of BoozinGear.com presents Clinically Proven, finished second overall in last year’s WSOBP. Both teams are poised to break the two-year-old cup differential of +60, set by Last of a Dying Breed two years ago.