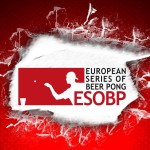 This past 4th of July weekend, while we here in America were celebrating our freedom with fireworks, recreational pong games, and more, our friends over in Munich, Germany, were hard at work as 144 teams from 14 countries battled it out at the very first European Series of Beer Pong (ESOBP)!

The ESOBP prize included: ultimate respect, a badass title belt and a trip to the United States to compete for $50,000 at The World Series of Beer Pong XI (July 6-10, 2016), inside the brand new event space at The Westgate Las Vegas Resort and Casino.

With nearly 300 participants in the building, hours of play ensued and eventually “Cup & Cupper,” Kevin Keenan and Christoph Vogel, toppled “MAC,” Michl Neubauer and Christian Rudat, for the European crown. Although the game went into overtime, in the end “Cup & Cupper” proved to be too much for “MAC” as they knocked down 3 straight cups to etch their name in the first chapters of the ESOBP history book!

(It’s hard to believe it was 10 years ago when BPONG crowned their first-ever World Series of Beer Pong Champions, ironically named “Team France.” Kudos to the original kings of pong, Nick Velissaris and Jason Coben. Check out this last known photo of the original “big check” before it infamously became a casualty of infinite cameras.)

If you want to be really impressed, check out the video of the championship game of the ESOBP here:

Watch out boys, these kids are good! Our current WSOBP Champs from New Jersey (“Pity the Fool” – Mike Vit and Kris Fraser) might be in a run for their money if they plan on returning to try and became just the 2nd team in WSOBP history to win back-to-back WSOBP Championship titles. (The first team to etch their names in the repeat champions list was, of course, “Smashing Time” – Mike Pop and Ron Hamilton.)