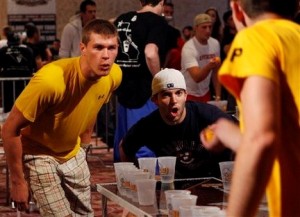 Most experienced players of Beer Pong know that in order to win, besides skills, you need to come up with creative ways to distract your opponent, especially if they’re in the lead. Here are some creative techniques that both guys and girls alike can utilize to beat their opponent.

GUYS
1) Awkward Stare
Nothing is more awkward and creepy to a female than a guy that seems as if he’s looking into the depths of her soul. By staring at a female opponent with that Friday the 13th look’, she’ll be trying to figure out what you’re thinking rather than making the shot.

2) Taking A Picture Of Your Opponent
Another great technique guys can use is the ‘taking a picture technique’. This is very effective because people are more self-conscious when they drink. They’ll be more concerned about not looking horrible on Facebook than aiming for the cups.

3) Confessions Time
Guys are expected to be very masculine and aggressive, by making a false confession that contradicts this belief you can effectively get into the mind of your opponent. Confessing something like “I still sleep with my teddy bear”, or saying something like “I miss doing ballet, it made me feel pretty inside and special” is a great way to get your opponent cracking up enough for them to lose all accuracy whatsoever. For added effects, ensure that you say it with a mean and aggressive stance.

GIRLS
1) Fake out Session
Who doesn’t like to see two girls making out. In this case you will be doing what’s known as a ‘fake out.’ Simply grab another female from the crowd and hold your hand between you and the other females jaw to hide the fact that you’re not actually making out at all.

2) Time For A Selfie
This technique is based on the law of attraction. Guys are known to lose focus on whatever they’re doing and allocating that focus on a female whenever they take a selfie while within close proximity of them. So strike one of your most flirtatious poses and watch as the drool falls just like the ball will instead of going into the cups.

3) Twerk, Twerk, Twerk
Another creative way girls can distract their opponent is to twerk. Even if you don’t know how, your opponent won’t care, if you’re lucky he might just lose his balance trying to keep up with your moves. Warning! This may lead to your opponent asking you for your number after the game.