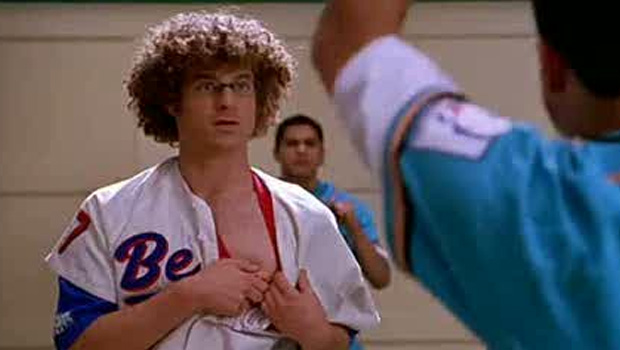 A lot has been written about beer pong distractions and trash talk. Trash talk is as big a part of beer pong as the cups and balls we use. Watch any finals match of a major beer pong tournament and you’ll likely have to turn down the volume if you are watching at work.

But what about distractions?

If beer pong distractions were an animal, they’d be an endangered species. The distraction techniques used by most of today’s players are lame and stale. Sure, you’ll see guys playing with cups behind the tables or pouring water on themselves or jumping up and down, but that’s kid stuff, guys. Most of you are better than that and we should hold each other to a higher standard.

Have you ever seen the movie “BASEketball?” I was 16 when that came out in 1998 and never thought something like that movie could ever happen in real life. Who would pay money to see people do shit like that? A decade and a half later, I’m thinking we need more of the BASEketball-type antics on the beer pong table. There are so many parallels to that movie and organized beer pong, it’s crazy. We need more “psych-outs.”

Most of us started playing at house parties and we’d do anything we could to distract the opposition. If you were lucky enough and had a girl to play with the distractions certainly became a lot more interesting. Somewhere along the line, the art of the distraction was lost. There isn’t any creativity or originality anymore. We need to bring it back. Giving yourself a stupid haircut and jumping around the table like a goofball isn’t enough anymore. And guys, pulling your junk out during a game is not a distraction. Nobody wants to see that, trust me 😉

One ill-advised summer when I was younger, I was playing a game of beer pong and became extremely drunk. I wanted to do something crazy during the game but I couldn’t figure out what to do. I saw a pint glass on the table, threw it against the ground, picked it up and started chewing the broken glass up in my mouth. It was maybe the dumbest thing I’ve ever done in my life, but it was pretty funny to watch. I mean, don’t try stuff like that at home, but as a community, we can do better. We are creative and gross enough to really push the envelope on distracting people.

What are some of the craziest distractions you’ve done to win a game of beer pong?

3 thoughts on “BASEketball and the Lost Art of the Distraction”