According to AskMen.com, there’s only a 40% chance you’ll sink that cup! 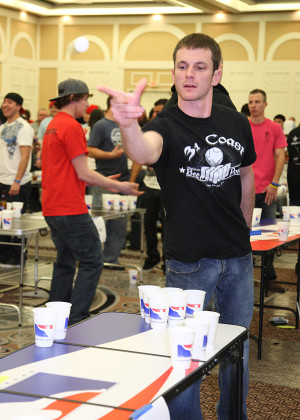 Ahh…, statistics in beer pong. These are definitely something we here at BPONG.COM have put a lot of thought into how to regulate and track.

Although, a cohesive system has yet to be perfected that accurately tracks and maintains player’s statistics from all the BPONG tournaments that people participate in around the country; we as a community, have done more than our fair share of projecting our own and our opponent’s shooting percentages.

The term “hundo” is thrown around by players pretty casually, though, most “hundo’s” seem to have a bit of a Reap-like smell to them.

(For those of you who might be lost, “hundo” is a reference to shooting 100% in a beer pong game. “Reap-hundo” is a term players use to reference a player claiming to have shot 100% in a game but had actually missed shots during that game.)

Even considering that the majority of the claims at shooting 100% in a game are likely inaccurate, there are players who do achieve this feat on a semi-regular basis, especially within the professional pong circuit. However, perfect games are not the only thing that seems to get exaggerated from time to time; players also tend to forget a good handful of misses when manually calculating a tournament shooting percentage estimate. Until a platform to track, record and store shot-for-shot statistics in pong is developed, we can only take our best guess at how well we actually shoot in any particular tournament.

Ian Lang of askmen.com and mathematician Dominic Spadacene break it down by the numbers, of which, will likely bring some of your self-shooting percentage projections back down to earth.

Dominic uses geometry to calculate the actual likelihood of a ball landing in a cup when a pong ball is thrown in the direction of the cups.

The mathematician’s formula never gives a player more than a 40% chance of making a shot, even with a full 10-rack set up! A clean shot (doesn’t hit the rim and bounce in), is projected to happen about 27% of the time. (Note: These calculations were NOT done with Official BPONG cups. Considering the smaller dimensions of BPONG cups vs. general party cups, these percentages likely would be even less if calculated on Official BPONG cups!)

Obviously, this does not account for the skills that a professional pong player possesses, but it does reveal an origin for performance evaluation. Now if we could only talk John Brenkus into considering all the other variables of a pro ponger’s shot to really get a good idea on just how well someone could actually shoot over the course of an entire tournament!

What do you think your lifetime tournament shooting percentage is?