This weekend, one of the country’s most revered professional pong tournaments will commence: The 6th Annual Best Of The West!

A quintuple of premiere organizations, including West Coast Pong, Nor Cal Beer Pong, Ocean Grown Pong, Pongstars.net and Fast Times Entertainment, will play host to the event. Festivities will kick off Friday night with a $2000 Multi-Partner tournament at Johnny V’s in San Diego, California. (945 Garnet Ave, San Diego, California, 92109) The Main Event will also take place at Johnny V’s on Saturday, June 6th, and will run thru Sunday, June 7th.

Here’s what to look for at this year’s event:

Reigning supreme over the Best Of The West’s operable tenure, Nor Cal Beer Pong (pictured below) will look to extend its legacy by adding a 5th title to their BOW collection. However, they will have to overcome replacing a key roster spot held by former World Series of Beer Pong Champion and pong legend, Mike Seivert. 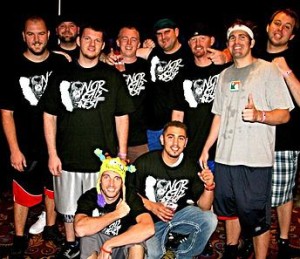 When it comes to the ladies, we’re looking for a battle between Arizona and Southern California!  After winning 3-straight women’s titles, the Arizona ladies squad (pictured below) will try to reclaim their hardware from last year’s Southern Californian championship team.

For additional pictures and more information about the Best Of The West, please visit the Official BOW webpage at: www.bestofwestpong.com

Or visit the Official BOW Facebook event page at: https://www.facebook.com/bestofthewestpong?fref=ts