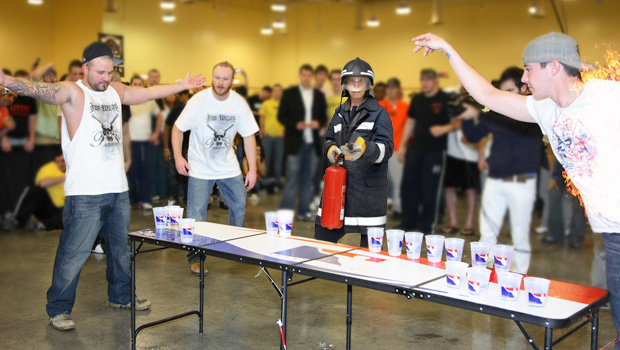 You just hit last cup and your opponent has four cups to rebuttal. You’re already thinking about how you’re going to spend that prize money. You and your partner are both relaxed. All smiles.

Your opponent makes the first rebuttal shot, leaving three on the table. You quickly re-rack and roll the ball back. No biggie, no way they hit three more, right?

They make the front cup on the three-rack and just like that, there’s two cups left. A feeling of uneasiness sets in, but you guys aren’t completely worried yet. The other team takes their time shooting at the two. Many players consider two side-by-side cups the hardest rack to hit in beer pong. Usually, it separates the pretenders from the contenders. You’ve been quiet for the last half of the game, but desperation is starting to sink in. You talk a little trash and maybe try a distraction to throw them off. No luck, they sink the left cup and there’s only one left.

The trash talking gets ramped up a little bit now. The crowd is into it, hoping they see overtime. If you’re one of those guys that like to throw cups and smash them and pour water over yourself, now’s the time to do it. All you need is one big miss. You take your time centering the cup and your opponent takes their time preparing to shoot. Everyone is yelling and you are a bit nervous. You thought this game was over a few minutes ago and now you’re helpless. They shoot.

A few moments later, your opponents are now spending that prize money you could have sworn was yours. You didn’t shoot terrible, but once they hit those four rebuttal shots, you didn’t stand a chance.

I don’t have any mathematical data to back up my theory, but in most cases, I believe the team that successfully sinks a series of rebuttal shots goes on to win the game. Momentum and confidence is everything in beer pong. Once you sink four, you know in the worst case, you can sink the three in overtime. Overtime becomes an exercise in jockeying for cup position. The team originally shooting the rebuttals becomes the aggressors, and once they sink the final cup first, it’s usually a losing proposition for the other team.

If you’ve been paying any attention to competitive beer pong, you’re most likely familiar with the finals of the World Series of Beer Pong III. Iron Wizard Coalition hit the final cup with four left for Chauffeuring the Fat Kid to rebuttal. The rest is history. Sorry Baker, I know you’re still haunted by this.

Obviously, there are exceptions to this, but I think in most cases the rebuttaling team uses that momentum to earn the victory. They put the other team back in the spot of making a big shot, and in many cases, once they sink the final cup and think victory is theirs, they lose that intensity needed to battle back in overtime. They get shook and it’s a helpless feeling when you see your opponent continually sink multiple rebuttal shots.

The same theory applies for the team that emerges from the loser’s bracket to earn a place in the finals. This team has already experienced adversity in the tournament. They’ve been playing more and are on a roll. The winner’s bracket finalist likely has been waiting a while to play, and if the loser’s bracket team can win the first game of the finals they normally go on to win the second.

Like in any sport, it’s the “hottest” team, not the “best” team, that usually takes home the trophy.